Want to Sniff Some Rosemary With Me? 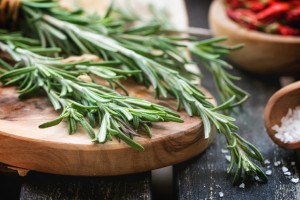 You have most likely seen the info passing around on Facebook that sniffing Rosemary is good for your memory. Did you think it was baloney?  I wondered too. So, of course, I did some research, and here’s what I found.

Rosemary has been known as the “herb of remembrance” for centuries! That’s pretty cool.

In 2012, research published in Therapeutic Advances in Psychopharmacology described a small study involving 20 people that suggested the scent of rosemary oil may improve speed and accuracy when performing certain mental tasks.
Then in 2013, Northumbria researchers reported at the Annual Conference of the British Psychological Society that putting the scent of rosemary in the air helped people with memory tests.

According to the Northumbria study, not only did participants do better with future memory tasks, but traces of rosemary oil was found in the blood samples as well. Future memory is the type of memory that we all want to improve. It’s remembering to take your medicine at a certain time, or remembering to pick up your daughter at the airport next Tuesday, or remembering to get a birthday present for your spouse.

The scientists believe that there are compounds in rosemary oil that may change memory performance. One of them is called 1,8-cineole – it may act in the same way as the drugs licensed to treat dementia, causing an increase in a neurotransmitter called acetylcholine.

These compounds do this by preventing the breakdown of the neurotransmitter by an enzyme. And since inhalation is one of the best ways of getting drugs into the brain, it makes sense that traces were found in the blood of participants. When you eat a drug it may be broken down in the liver, which processes everything absorbed by the gut; but with inhalation, small molecules can pass into the bloodstream and from there to the brain without being broken down by the liver.

Researchers said that, “These findings may have implications for treating individuals with memory impairments. It supports our previous research indicating that the aroma of rosemary essential oil can enhance cognitive functioning in healthy adults, thereby extending to the ability to remember events and to complete tasks in the future. Remembering when and where to go and for what reasons underpins everything we do, and we all suffer minor failings that can be frustrating and sometimes dangerous. Further research is needed to investigate if this treatment is useful for older adults who have experienced memory decline.”

I don’t know about you, but I love the scent of Rosemary and I plan to put some in the garden this year, keep it hanging around the kitchen year round, hoping it will not only make the room smell great, but assist my memory as well.