To Gluten or Not To Gluten…

Have you thought about going gluten free? Have you wondered what all the buzz is about? 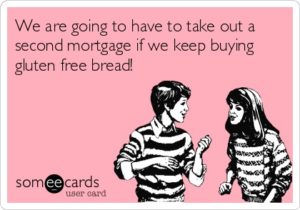 Well, I have just reached my one year anniversary of being gluten free. I originally went gluten free to see if it would help my psoriasis. Sadly, it has not. There have been other benefits that I hadn’t counted on, though.

First of all, if you are wondering what the heck gluten is, I’ll tell you. Gluten is a protein found in wheat. It’s the “glue” that makes bread and pasta stick together and hold their shape. If you’ve tried making a sandwich with many of the gluten free breads, you can see exactly what I mean, as your bread crumbles apart instead of surrounding your filling. Pretty messy.

In some people, gluten triggers an autoimmune response that attacks the lining of the small intestine. This means that the body is unable to effectively absorb nutrients into the bloodstream, which can lead to anemia, delayed growth, and weight loss. This is celiac disease and it’s very serious.

Other people can be gluten intolerant, which is less serious, but not much fun either. Gluten sensitivity can cause symptoms such as bloating, gas, diarrhea, fatigue, headache, “brain fog,” and itchy skin rash. The skin rash part was why I originally stopped eating gluten, hoping that mine would get better.

Going gluten free is not as difficult as you might think. There are lots of foods that are naturally gluten-free, for example, fruits and vegetables, eggs, meat, fish and poultry, unprocessed beans, seeds and nuts, and the majority of dairy products. Many grains: buckwheat, corn, flax, quinoa, rice, soy, arrowroot, and millet are gluten free. There are bread and pasta choices that are made with these naturally gluten free grains.

A Mediterranean diet, which many docs believe is the best thing for us includes tons of veggies and fruit, a little bit of meat, poultry or fish (protein), and a bit of grains as well. I love veggies and fruits, as well as quinoa and rice. Ronzoni also makes a gluten free pasta that’s quite good, so I have no trouble staying on this type of diet.

A 2011 study, conducted by Peter Gibson and colleagues from Monash University in Australia, concluded that Gluten Intolerance might be a legitimate disorder, after finding participants that consumed gluten experienced increased bloating and fatigue. But then a small study done in 2013 found just the opposite, so the reality is that more, larger studies need to be done in order for us to know if gluten is a problem for many or not.

What I can tell you is that I have more energy without the gluten. I have two students who went gluten free to rid themselves of skin rashes. Both rashes went away, PLUS, they both feel less fatigued as well.

I will also say that I am not totally without. If I am out somewhere and I want to order a lovely Italian dish with pasta, I order it and enjoy it. I no longer consume gluten on a regular basis, but I don’t deprive myself of something I enjoy, occasionally.

If you want to try it, just to see what you may experience, go ahead. It’s pretty easy and you don’t have to buy special food, unless you want the gluten free bread or pasta. Try it for at least 30 days and see if you feel any different.

So the jury is still out on gluten. Right now, in spite of all the advertising urging you to buy high priced gluten free products, unless you have celiac disease, there is not a lot of evidence that gluten is bad for you. Have you gone gluten free? Are you going to try gluten free? If you did or are, drop me a line and let me know about your experience and I’ll share it with the group.

BMI is NOT a reliable tool to diagnose obesity!
October 30, 2022