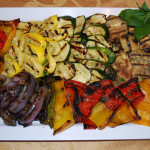 I just read in my copy of the Physician Committee News that 75% of restaurants at the nation’s busiest airports are offering at least one cholesterol-free, plant-based, fiber-packed meal, according to a new report from registered dietitians at the nonprofit Physicians Committee. Cool!

Baltimore/Washington International Thurgood Marshall Airport ties with Newark Liberty International Airport for the most improved airport this year and takes the lead with 92 percent of its restaurants offering nutritious fare. Seattle-Tacoma International and Los Angeles International follow close behind with a score of 90 and 88 percent, respectively. Even though Atlanta comes in last, roughly half of its airport eateries are moving vegetables, whole grains, and legumes to the center of the plate.

The takeoff of plant based eating and the rising popularity of nutritious food among people all over the world is a true “good news” story!

Most of us used to leave healthful eating in the dust while traveling, but that no longer holds true. Consumer lifestyles are shifting, and plant-based meals are in high demand—even on the go. The food industry is listening, and it’s getting on board the flight to better health – Alleluia!

If you’d like the whole list of busy airports so that you know where to fly out of or into, HERE you go!