Did you ever have one of those days when you want to do so much, but can’t figure out how to fit it all in, and end up just feeling discombobulated?!

I thought, “just get out there and do something!”

So, I put on my walking shoes and out the door I went. I headed for the peas and began picking them while doing some squats. That felt good!

Then I decided to walk around the yard and pick up all the branches that had fallen from last night’s storm and while I was doing that, I realized I could do some HIIT using the steps to my Yoga studio. So I walked around the yard for a two minute warm up, then ran up and down the steps for 30 seconds, followed by a slow recovery walk, including some backwards walking (which is also great exercise) for 90 seconds; then I repeated the 30 second mad stair dash until I could barely breathe… (That’s really what should happen when you are doing high intensity interval training). I repeated my backwards walking for another 90 seconds, then jumped up onto the first step and hopped back down for 30 seconds. I repeated that exercise twice, with a cool down between sets, it was fun!

Next, I fast walked down to the beach, took off my shoes, and walked on the beach to restore my energy and while I was there, wonderful things happened. There was a little boy in the water who seemed upset about a dead fish on the shore, so after a few minutes and the second time he mentioned it to me, I stopped and said that if he wanted, we could bury the poor fish. He seemed to feel better about that so I helped him dig out a rock, put the fish into the hole and then pile some rocks on top of it. He was satisfied with that and went back into the water, continuing to chat on and on with me about his favorite movie. I’d made a lovely connection and perhaps a friend for life.

Soon after, I noticed a woman about my age attempting to get into a kayak. She was a little nervous about it and asked her friend not to laugh when she flipped over. I walked over and explained how she could get into it on the sand where it wouldn’t tip her into the water, then how to use her paddle to push herself into the water smoothly. She did it and was very happy to have learned a new technique! 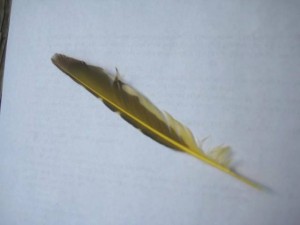 On my way back up the beach toward home, I found a bright yellow and black feather. Feathers are good omens. Native Americans believe they are messages from angels – I’ll take that! It is possible to do everything you want to do when you just start somewhere! What a lovely afternoon break.

Which Exercise is Best For Your Brain?
September 5, 2022